Numbers are usually coded in one form or another so as to represent or use it as required. For instance, a number ‘nine’ is coded in decimal using symbol (9)d. Same is coded in natural-binary as (1001)b. While digital computers all deal with binary numbers, there are situations wherein natural-binary representation of numbers in in-convenient or in-efficient and some other (binary) code must be used to process the numbers.

One of these other code is gray-code, in which any two numbers in sequence differ only by one bit change. This code is used in K-map reduction technique. The advantage is that when numbers are changing frequently, the logic gates are turning ON and OFF frequently and so are the transistors switching which characterizes power consumption of the circuit; since only one bit is changing from number to number, switching is reduced and hence is the power consumption.

Let’s discuss the conversion of various codes from one form to other. 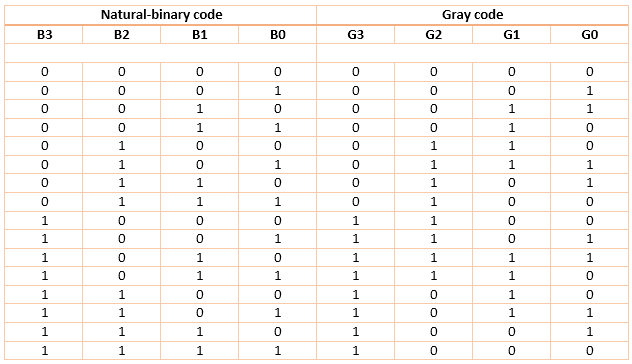 Looking at gray-code (G3G2G1G0), we find that any two subsequent numbers differ in only one bit-change.

The same table is used as truth-table for designing a logic circuitry that converts a given 4-bit natural binary number into gray number. For this circuit, B3 B2 B1 B0 are inputs while G3 G2 G1 G0 are outputs. 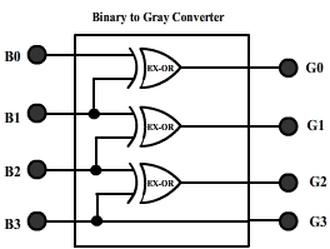 So that’s a simple three EX-OR gate circuit that converts a 4-bit input binary number into its equivalent 4-bit gray code. It can be extended to convert more than 4-bit binary numbers.

Once the converted code (now in Gray form) is processed, we want the processed data back in binary representation. So we need a converter that would perform reverse operation to that of earlier converter. This we call a Gray-to-Binary converter.

The design again starts from truth-table: 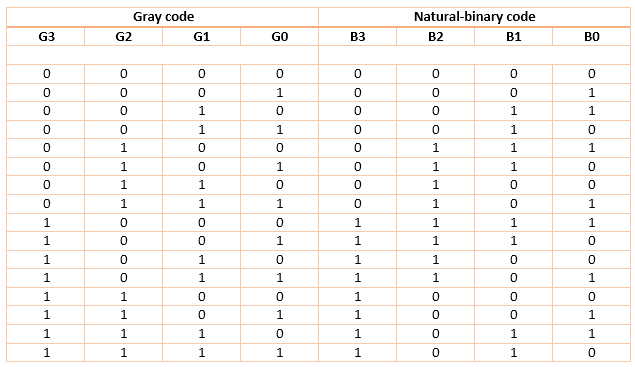 
The realization of Gray-to-Binary converter is 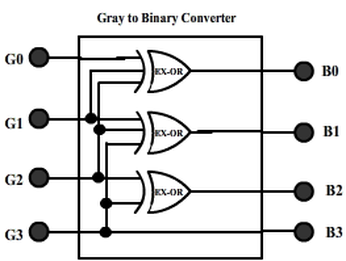